One name that is jetting up the ranks of up and coming stand up comedians is Steve Uribe, who has been a staple in the Utah improv scene for years..  It’s Always Funny in Salt Lake City delves in the the evolution of the Ogden comedy scene, pet habitats and his beginnings in improv.  He is also tall.  So he might a superhuman or just have a problem with growth hormone hypersecretion.

It’s Always Funny was pleased to have Steve as part of the the first Comedy Showcase.  He also was the highest votegetter in the recent Wiseguys 119 Indi.com competition.  He is also a vital part of a couple great shows up in Ogden that happen every Thursday and Sunday. So check it out.

You are very tall… which shorter local comedian will slay you like David slayed Goliath?

If you could turn yourself in to a food, what would it be? Why? Who would you want to eat you?

A bowl of chile verde and tortillas. Greatest food on earth. It’s a sauce and main! My wife. Slurp me all up!

If you had to live the rest of you live in the habitat of a popular household pet, would you rather live in a hamster cage or a bird cage? Please explain your reasoning.

I guess a hamster cage. Hopefully I would have a cool owner and he would buy all those extra tubes and allow me to go all over.

You got your start in improv. When did you start doing that?

When I was 17. My first show was actually on my 18th birthday.

Quick wits, Off the Wall, Mission Improvable, Laughing Stock.  Can’t pick a favorite they all hold a special place!

What is the biggest challenge of starting in improv and then starting stand-up?

Having to plan the material. Natural instinct says, “just have a topic” but if you don’t write jokes out, you can really fail.

What do you enjoy most about improv? Stand up? What do you dislike about each?

The team factor in improv is so fun. Playing off teammates and finding out where you end up together. I love standup for the challenge of it all. Getting a room to laugh at the things you said is always a rush. Improv gets repetitive. Sure the topics change but the games are always the same. The thing I dislike the most about standup is when people find out you are then expect you to perform for them.

Why did you start doing stand up comedy after being in improv so long?

It just felt like time. I had a lot of creative energy built up and so I needed a release.

Jim Carrey was a huge one for a long time. Lately I have been shifting to more locals. Guy Seidel, Christian Piper, and Troy Taylor are some I have now.

Who have been some of the biggest helps for you in your comedy career?

You are part of the budding Ogden scene. How did the emergence come about?

Bout time hit Travis Rasmussen up for a show. He hit Josh Nufrio who hit me up. Then we all came together and been banging it out.

You have helped run 2 rooms up north.  What are these shows and how can people get involved?

Bout time is Sundays, Movie grille is Thursdays. Just hit up me Travis or josh and we will get you in.

Who are some of the big players in the Ogden scene?

Jokers Gone Wild are the biggest. They been going hard for 2 years now and they work really hard.

How do the crowds in Ogden compare to Salt Lake?

In Ogden I have a small following so they are more on my side. But I love Salt Lake for that. The chance to win them over is the best.

If you were to give advice to other cities on how to start developing a scene, what would suggest?

Work together. Always work with everyone who wants in. You never know what person will add that little something you need. So reach out, and use what you can.

Book shows. I just wanna keep doing as much as I can

What is your biggest comedic accomplish to date?

Between your stand up and improv careers what has been your favorite experience?

Keys on Main show was really awesome. Hard to best that!

My sexy shower pose joke. And oh your tall.

What do you think of the Utah Comedy Scene?

It’s starting to blow up. It’s been mostly Salt Lake but seems the whole state is waking up now.

Where do you see it in 5 years?

It’s gonna be a huge party. Everyone is invited. And Nicholas Don Smith will be the DJ!

What is the thing happening in the comedy scene that you are really excited about?

Our stages up north. I really like that we are building something new and fun.

Name one local comedian that is blowing your mind right now? Why?

Abi Harrison. Her flow and style are so damn good. She makes me giggle everytime I see her.

Lots. June 19th is the big one everyone should check out. At MovieGrille in Ogden. 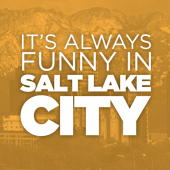